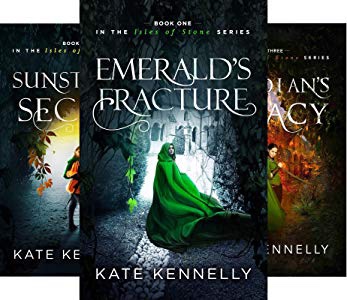 The Isles of Stone Series by Kate Kennelly

I literally just finished reading this series.  I wouldn’t have felt right doing this post without finishing it.  It is definitely a great series.

I discovered the series because Kate Kennelly liked one of my posts on Instagram.  Since her handle said she was an author, I wanted to give her page a look.  I saw she had written a trilogy of YA fantasy books, so I ordered them from Amazon to give them a try.

Right off the bat, I like that they are shorter books.  Sometimes, I need to read something shorter to get me out of a book slump.  For other tips, please see my post How to Get Over a Book Hangover.  I read all three of these books in one sitting (each) and found myself unable to put them down.

Emerald’s Fracture introduces the reader to a vast fictional world made up of five main islands.  Each island has it’s own power source and thriving industries.  The politics and issues between the islands develop throughout the story.

I really enjoyed the medical based magic system used in this series.  It was unlike anything else I had read before.  Although there is more to the magic system than just the healing abilities found in Jules Ravenwood and Natalie Desmond, that was the most interesting type of magic (in my opinion).

While I really loved Emerald’s Fracture, I wasn’t so sold on Sunstone’s Secret.  It’s no secret that the second work in a trilogy is often times the weakest link, and in this series, it’s no exception.  I wasn’t happy with the cliffhangers or the self-pity Natalie adopted in this book.  She spent too much time pouting about not being useful.  I did not read book three for almost two months because I was left so unsure after book two.

By book three, Obsidian’s Legacy, I had high hopes for my favorite characters.  I wanted to see this story get back to the roots that started in Emerald’s Fracture, healing magic and their school.  I did get my wish as well as a really poignent take on brain injuries and head trauma.

I suffered from a severe concussion when I was 13 and suffered from many of the symptoms that Natalie has in Obsidian’s Legacy, fatigue, memory loss, fumbling with words.  It took years to feel like I was back to myself but I really enjoyed the realism captured in her healing process.

The healing process is often not a linear battle and Kate Kennelly illustrates that so well in this series.  I have read far too many YA books where a character is basically dead, near death, or has died and come back and they are basically exactly the same.  It was incredibly refreshing to see an author convey the reality of trauma in a fantasy story.

While I didn’t love the way the Epilogue in Obsidian’s Legacy ended, I was ok with it.  I understand why it ended the way that it did.  Overall, this is a great series with themes not found often enough in YA books.