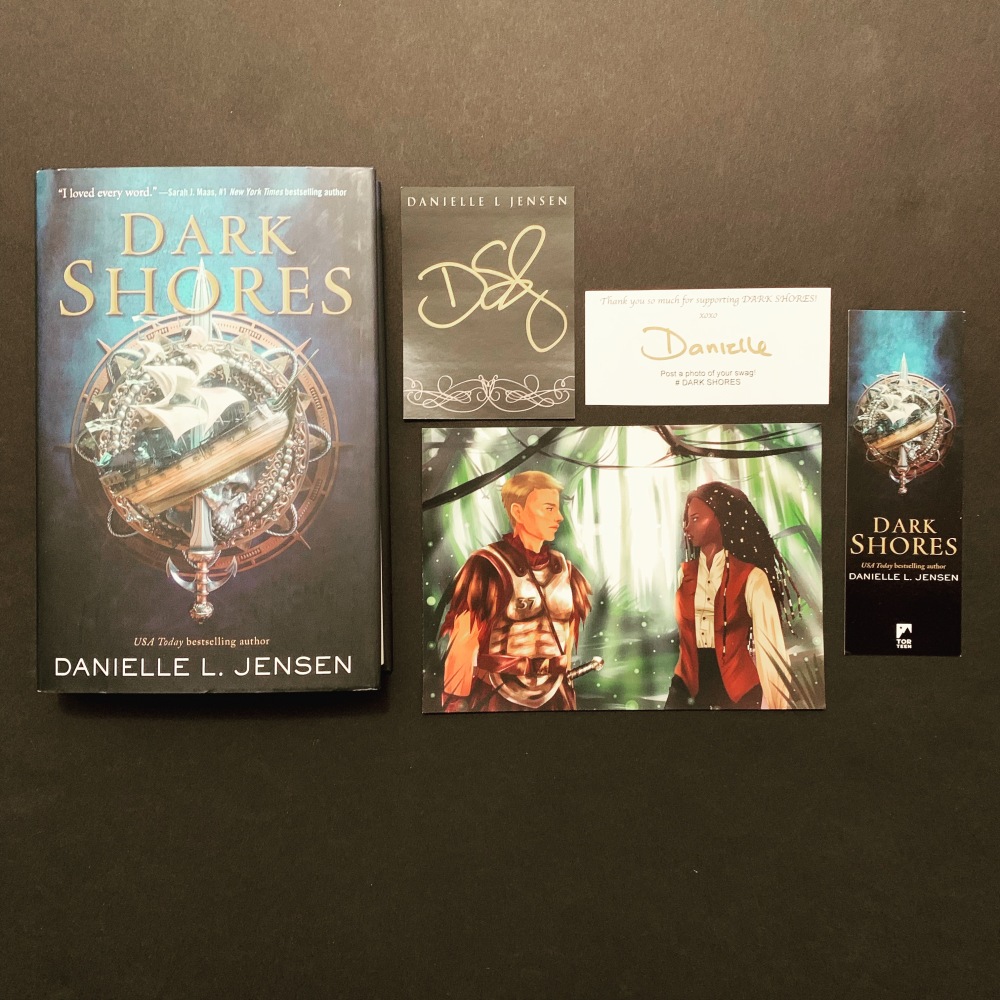 **Disclaimer, I have not read Dark Shores or any spoilers about it.  I received my copy and preorder swag today (release day).  The following post is pure speculation on what I think I will like and dislike about it.**

In a world divided by meddlesome gods and treacherous oceans, only the Maarin possess the knowledge to cross the Endless Seas. But they have one mandate: East must never meet West.

A PIRATE WITH A WILL OF IRON
Teriana is the second mate of the Quincense and heir to the Maarin Triumvirate. Her people are born of the seas and the keepers of its secrets, but when her closest friend is forced into an unwanted betrothal, Teriana breaks her people’s mandate so her friend might escape―a choice with devastating consequences.

A SOLDIER WITH A SECRET
Marcus is the commander of the Thirty-Seventh, the notorious legion that has led the Celendor Empire to conquer the entire East. The legion is his family, but even they don’t know the truth he’s been hiding since childhood. It’s a secret he’ll do anything to protect, no matter how much it costs him – and the world.

A DANGEROUS QUEST
When an Empire senator discovers the existence of the Dark Shores, he captures Teriana’s crew and threatens to reveal Marcus’s secret unless they sail in pursuit of conquest, forcing the two into an unlikely―and unwilling―alliance. They unite for the sake of their families, but both must decide how far they are willing to go, and how much they are willing to sacrifice.

This sounds like Rome meets Pirates of the Caribbean and I am all about that.

I love, love, love the cover on this one.  The sword, ship, and wheel are all so detailed and representative of what I think this story is all about.  I also love the deep blue background.  It looks like the cover is underwater with sunlight shown on the center.

Notes on the Dust Jacket

If this isn’t told in alternating POV narration – I WILL BE UPSET.  I am already basically obsessed with both Teriana and Marcus and I want to read their stories simultaneously.  I haven’t actually opened the book yet (except to place my book-plate) so I’m not sure how the writing style will be.  But that’s what I want and I will be disappointed if I don’t get it.

I am always happy to receive preorder swag for purchasing a book.  This package is just what I would have wanted too.  Signed book-plate – so now my copy is autographed, matching book mark (because I love to be matchy-matchy), and a postcard sized art print (just big enough to fit in a picture but small enough to store easily).  A+ on the preorder gifts – they will make great pictures and are super useful.

I haven’t read the Malediction Trilogy by Danielle L. Jensen, but I have heard good things.  This book sounds incredible but I am putting a lot of importance on the narration.  If this is only one POV, I think I might not like it.  We’ll see once I read it.  Look out for my review hopefully coming this weekend.